Where the Sky Meets the Earth - Ecuador - Moto Trip: The Americas 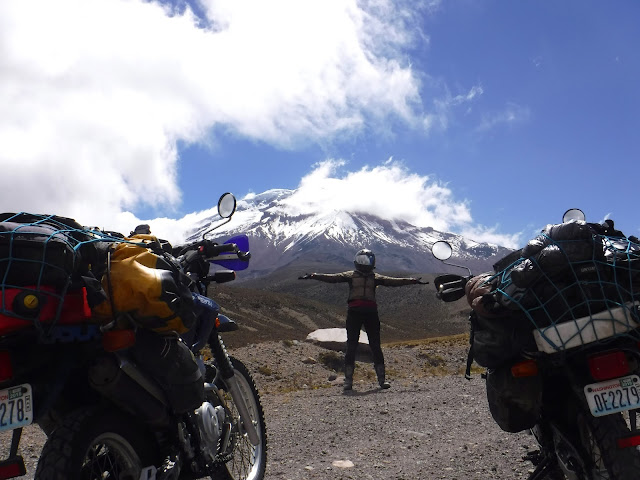 Since this was our second trip to Ecuador (see the previous Ecuador post here), we didn't spend as much time exploring as we did in other countries we visited.

We left Las Lajas early in the morning and arrived at the border to Ecuador at 7:30. It seemed to be simple at first. We dropped off our registration papers at the aduana, then got in line to get our passports stamped out. But the line wrapped around the building and down the road. Apparently this was partly due to the holidays, and partly due to the large amount of Venezuelans leaving their country in search of something better. After 3 hours we finally got an exit stamp and were allowed to move to the Ecuador immigration line about 100 feet away. We re-parked our bikes and stood in an even bigger line before being told that we were in the line just for Venezuelans. There were no signs explaining this of course. So then we had to get in a different line and wait another 2.5 hours to get our entry stamp. Then we went to the aduana (customs) and as they were typing our documents up, the power went out, and the government employee told us her shift was over and she went home, leaving us sitting there thoroughly pissed off. We finally managed to annoy some other employees enough that they did our bike papers and we entered Ecuador after 7.5 hours, our longest border crossing yet.

The ride in to Ibarra was uneventful, but at least pleasant as we tried to stick to roads other than the highway. We stopped in the small city of Ibarra for the night, where we found a place serving surprisingly good Mexican food before we fell asleep for the night. The next morning we headed to Otavalo, where we had visited the famous craft market 4 years prior. This time we weren't looking at shopping around. We were there for two things: an alpaca sweater for Johanna, and a shrunken head. We found both within minutes and were able to continue on. 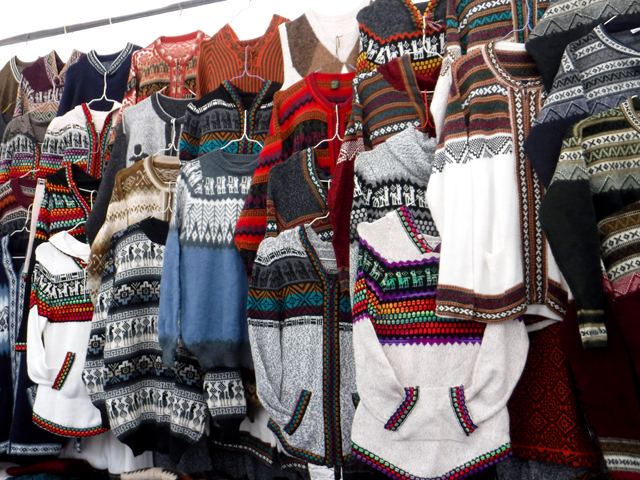 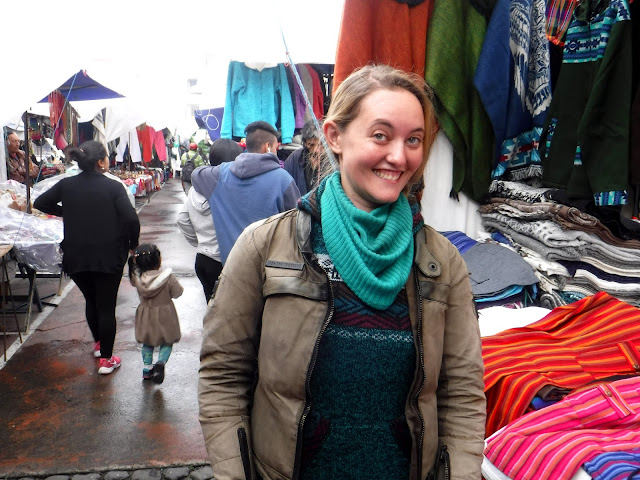 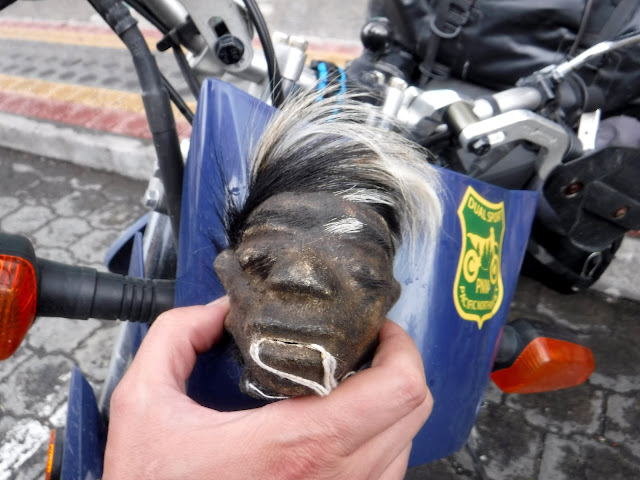 We originally weren't planning on visiting Quito this trip, but desperately needed new chains and sprockets, which we were unable to get in Colombia. We contacted Ecuador Freedom Bike Rental, who we used last time we were here, and they said they could help. We got an airbnb outside of the city and managed to see the new Star Wars film while they took care of our bikes. 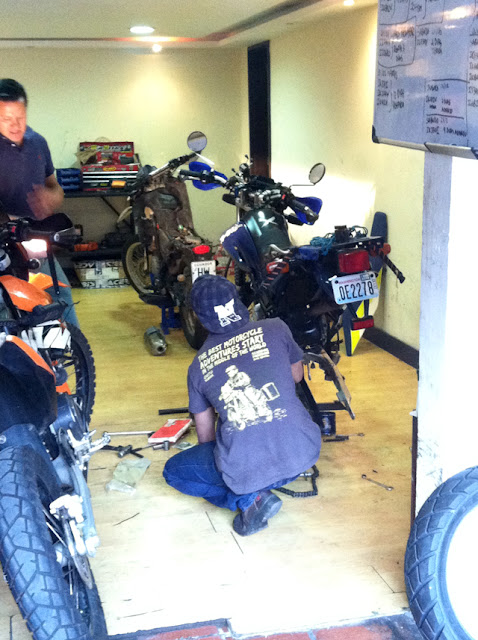 Ready to ride again, we headed South from Quito to the town of Banos. Yes, it means bathroom. We had originally visited Banos last time, but had gotten in very late and didn't get to explore the area properly. This time we did, riding high up into the surrounding mountains as well as visiting a local hot springs where they made us buy and wear shower caps. 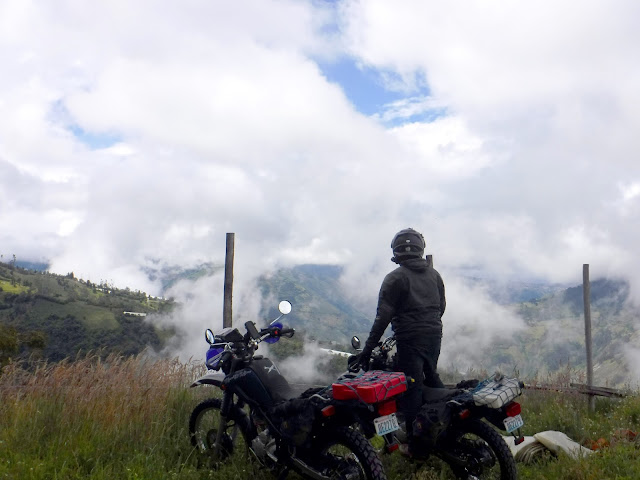 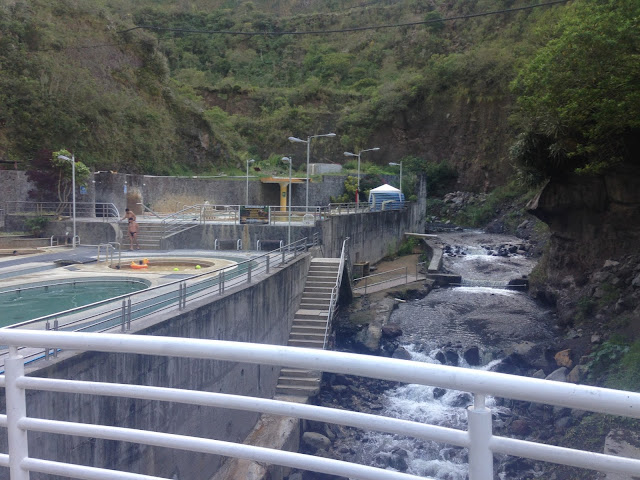 That evening we met Mary Beth and Bruce, another couple traveling on motorcycles. We shared a great dinner with them and enjoyed talking about life on the road the way only other moto-travelers can.

The next morning we rode out through the mountains to the volcano Chimborazo. By the time we reached the base of the volcano we were at 14,000 feet and freezing. We had to put on our waterproof gloves as we rode through the wind blasted road around the volcano. On the way we saw local Vicuna, and got some amazing shots of the snow covered peak. This was definitely a highlight of Ecuador for us, and we highly recommend a visit. 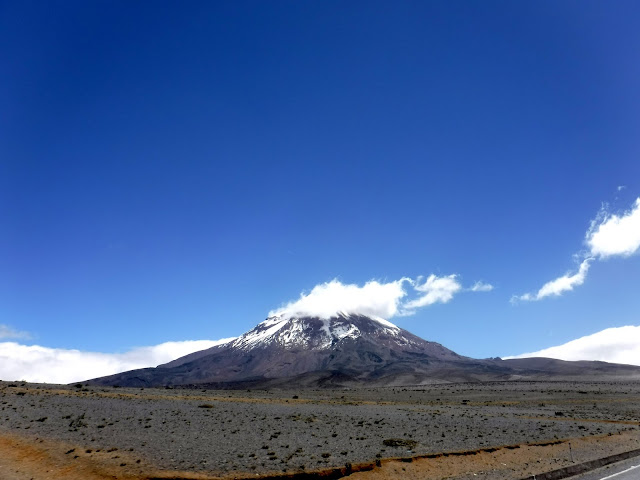 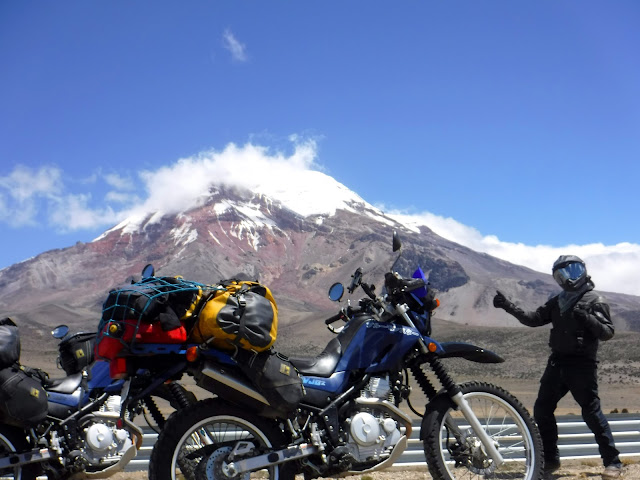 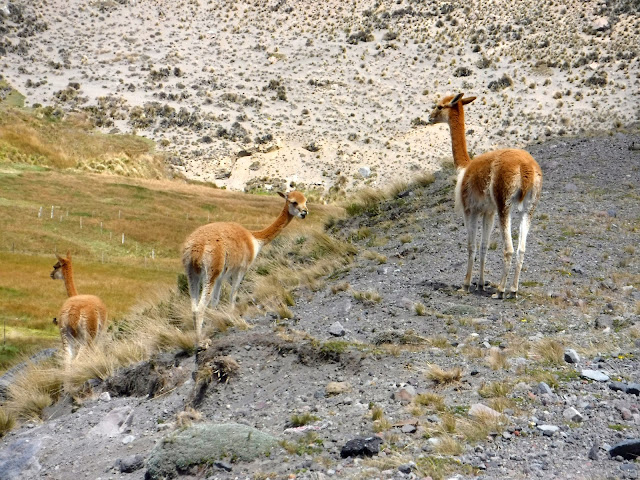 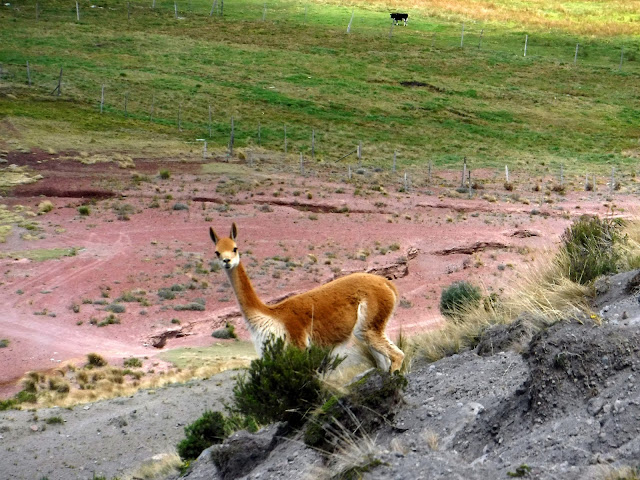 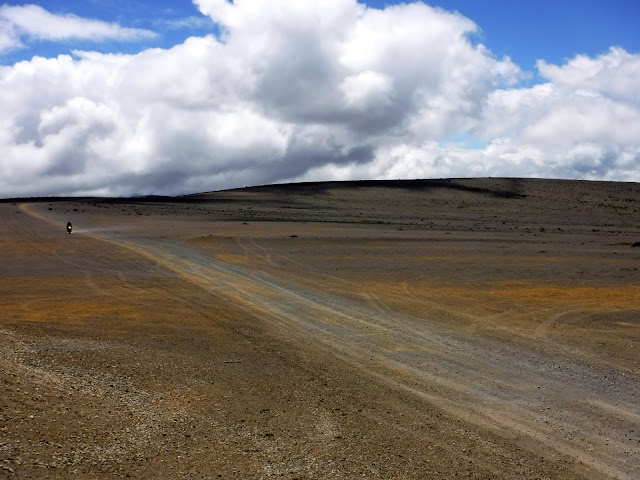 From Chimborazo we continued South to the small mountain town of Alausi. They had us ride our bikes up the curb and into the narrow hallway to park inside for the night, which proved a little difficult in the morning when we left. We had a lot of locals staring at us. It seemed like they must not get a lot of foreigners riding motorcycles through there. 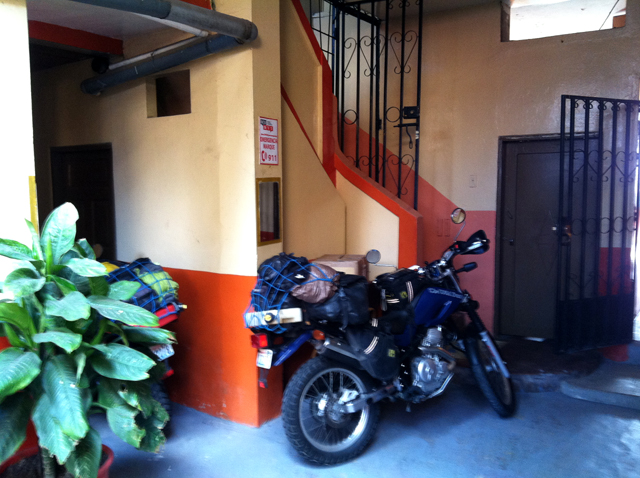 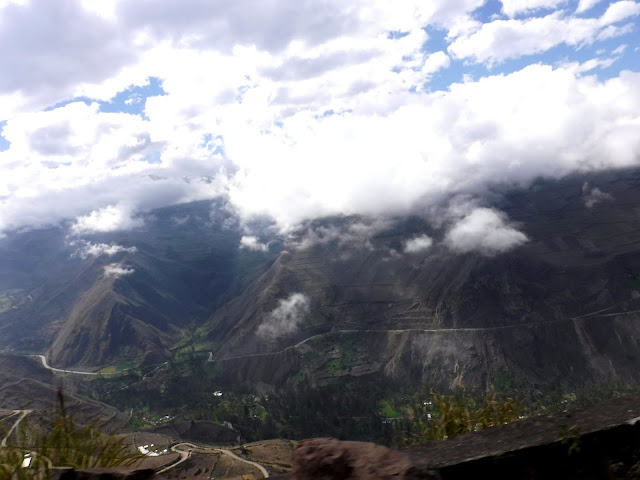 From Alausi we rode through some heavy mist down to the city of Cuenca, arriving at the Dreamcatcher Hostal on Christmas Eve. The town was fairly empty of the holidays, but we spent an extra day there relaxing and not doing much of anything for a change. The next day we had a long ride of 250 miles to the small border town of Macara, where we made sure to get gas that night, as the line for the only gas station in town takes about 30 minutes. 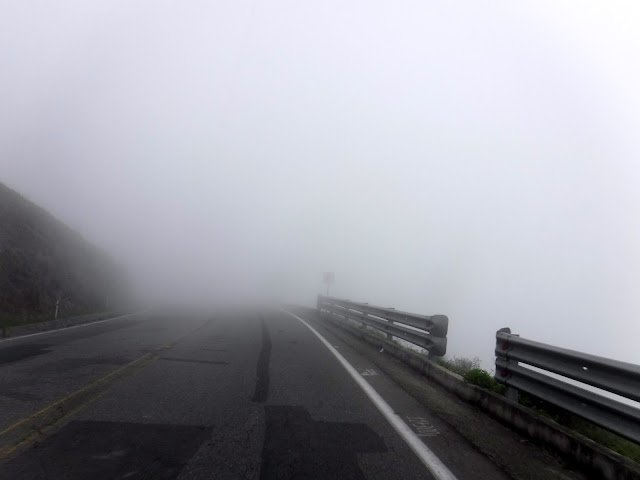 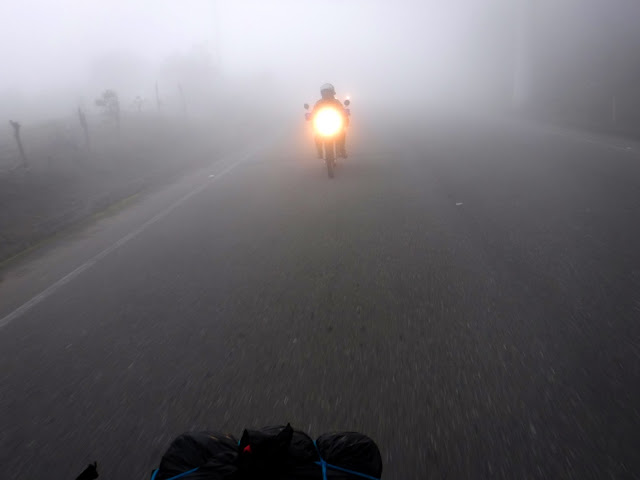 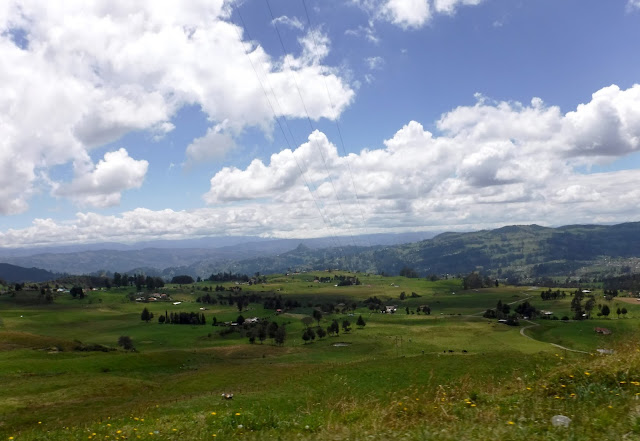 The next morning we woke up early and headed towards the border. Everything was going fine and we were in good spirits, when we came around a corner and the road immediately turned terrible. In sight of the border bridge, Johanna hit a large patch of sand and her bike spun out from under her. Her right leg was pinned under the bike and a local man ran over to assist me in lifting it off her. She was luckily wearing all over her safety gear, but we worried that the way her leg had twisted may have done severe damage to her knee. She limped around for a bit, shaking from the shock, but declared she was capable of continuing on. She sat at the border shack trying to drink water and keep from passing out while I handled our paperwork. It took an hour to leave Ecuador, and another 1.5 hours to enter Peru, get SOAT insurance, then pass through Peru customs. Finally we were in Peru and Johanna said putting her helmet on strangely made her feel better. We'd see if that was true after we found a place to stay for the night…. 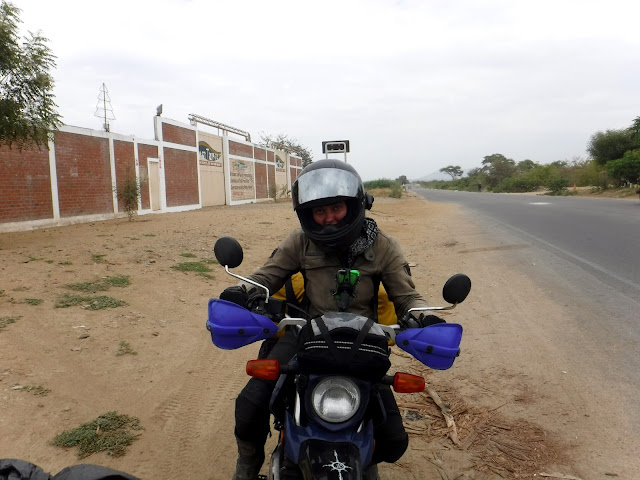