Olargues, a Medieval Town in the Midi-Pyrenees, France 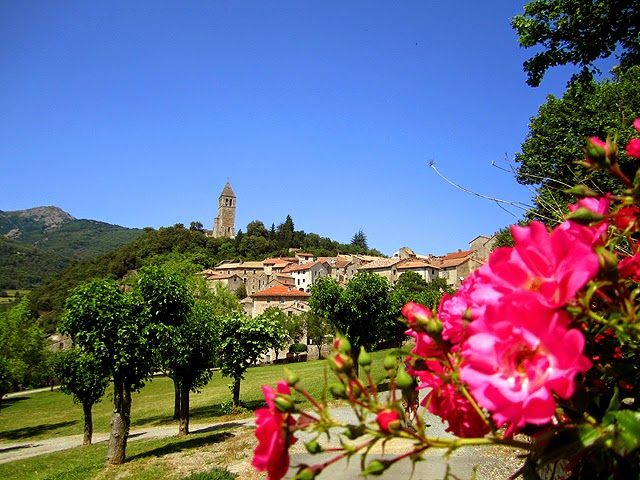 We arrived in Olargues on June 9th. It had been a decent travel day- we took the shuttle to the airport in Beauvais (1 hr ride- 17.90 euro/person) and then a flight to Beziers, an hour's drive from our first workaway in the south of France ($26/person- funny how the shuttle and the flight almost cost the same). The airport in Beziers is very small, there are only two gates, with only one airline operating out of it. We arrived around 7pm but it was still light out and we found our hosts Elke and Norbert waiting for us in the tiny airport's parking lot. 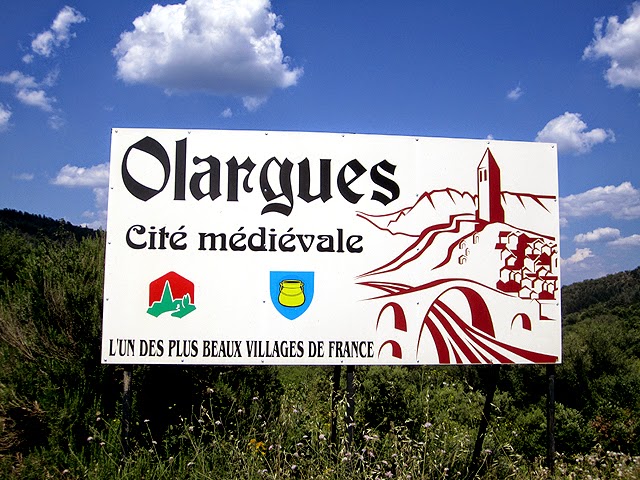 We stopped on the way to Olargues at a fruit stand where Norbert insisted on treating us to local wine, which we'd have with dinner. The wine is amazing in this region since it's wine country. It's super cheap at about 3 euro for a 2 liter bottle and it's really good- which was a relief after our experience in Paris.

Once we got to Olargues, Norbert drove us slowly through town so we could see all the landmarks, such as the Devil's Bridge which was built around 1200 CE and is reputed to be where the people of Olargues did business with the devil.

Once we got to Norbert and Elke's lovely house which is located just outside of Olargues, Elke cooked us a vegetarian dinner which was excellent, as were all of the meals we were served while staying with them. We even tried a few things that we hadn't tried before, such as bulgur, which was super yummy. Elke, if you're reading this, I want that bulgur and garbanzo bean recipe from you! :) 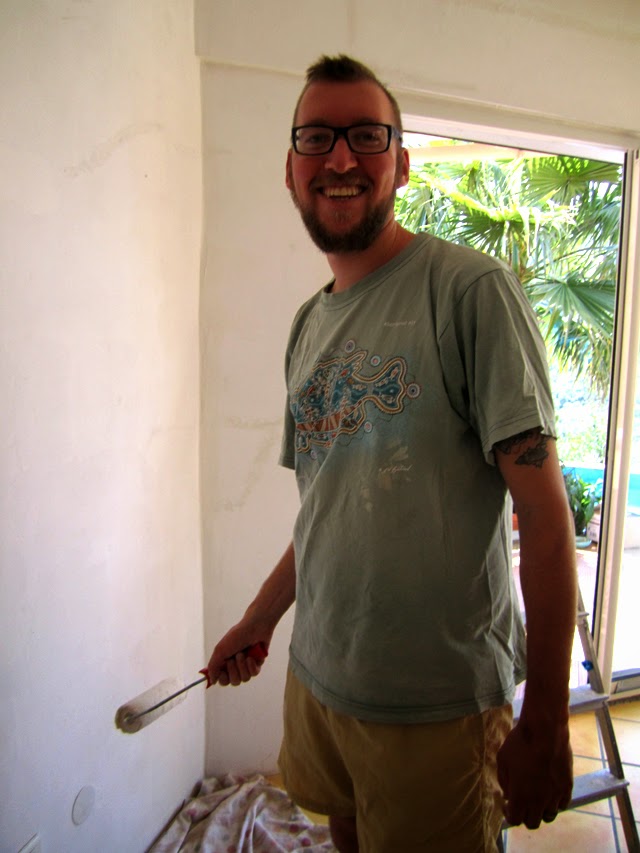 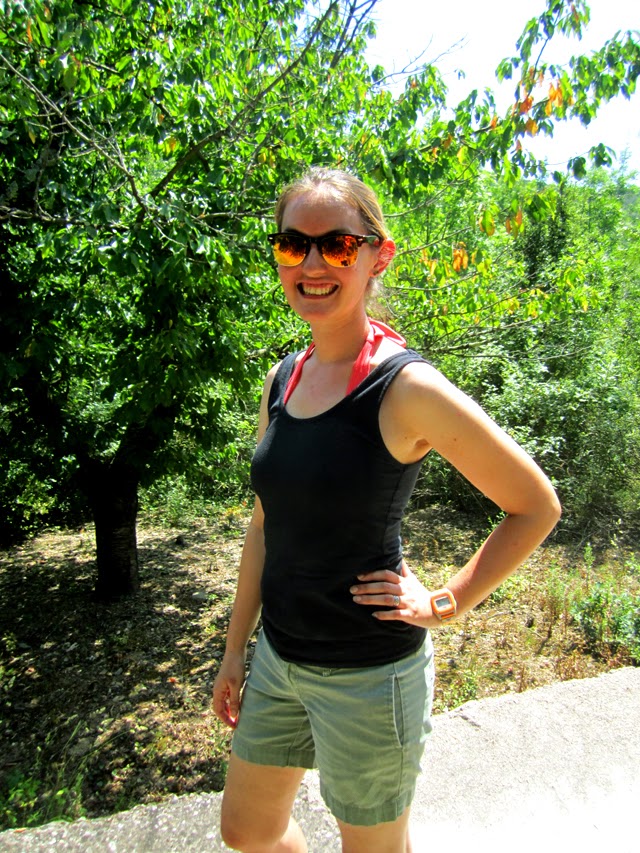 The next day we had our first day of working and we painted and patched holes in the living room for 4-5 hours. Around 1pm or so we set off to explore Olargues. Norbert and Elke had told us about a former rail-line that ran along the river from where they lived to Olargues called the Piste-Verte. We set off to find it, but of course we got lost, so we walked along the two lane highway to Olargues. 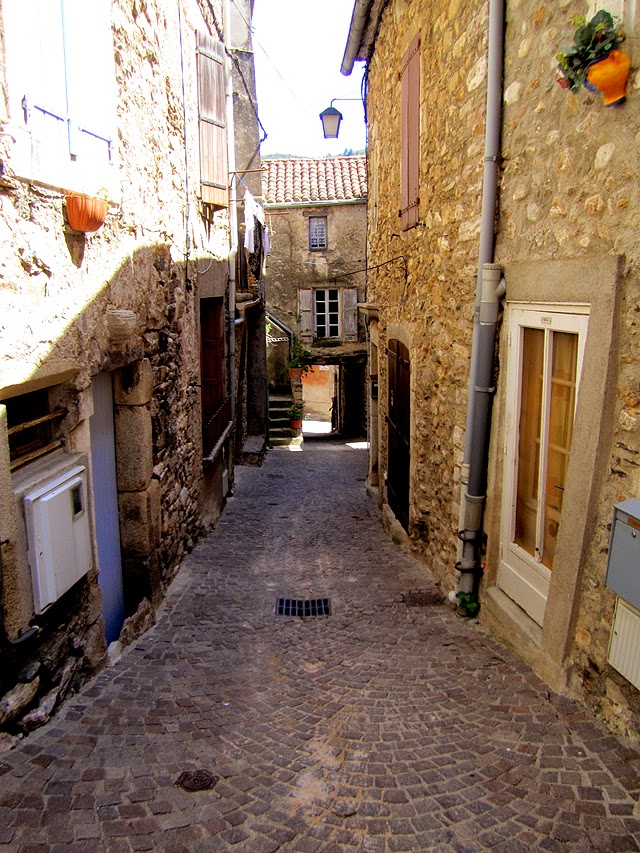 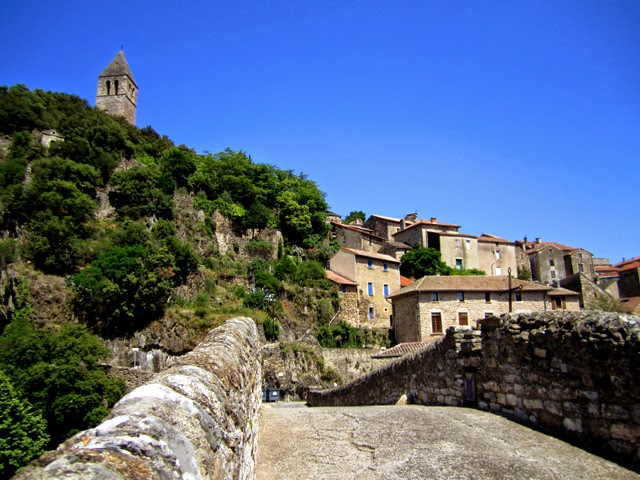 It is easy to see why Olargues is listed as one of "The Most Beautiful Villages in France." Walking through town is like walking back in time. The town is filled with winding streets and cobblestone roads that are impassable by cars, with a bell tower that used to be part of a castle that overlooks the tiny town. 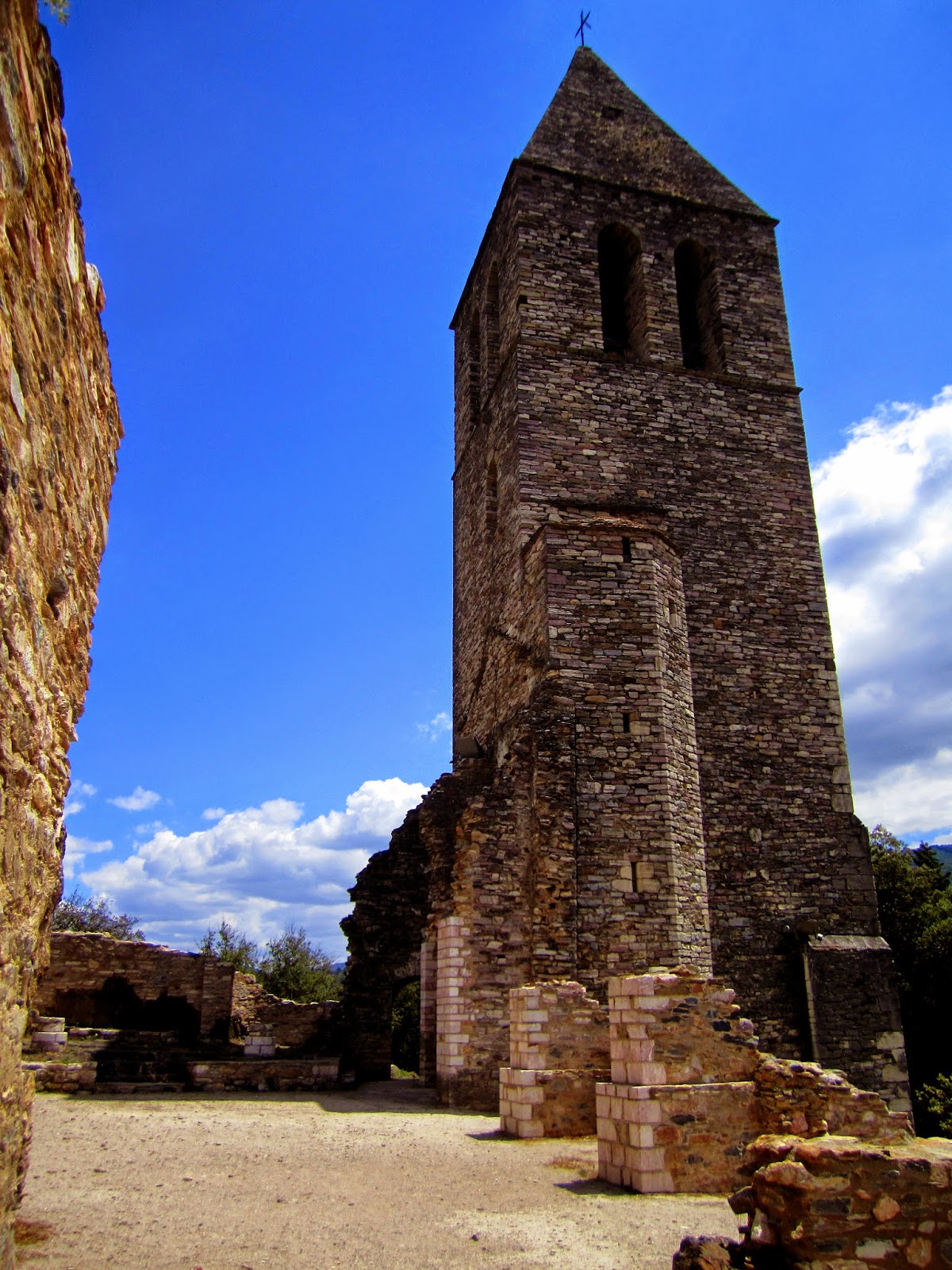 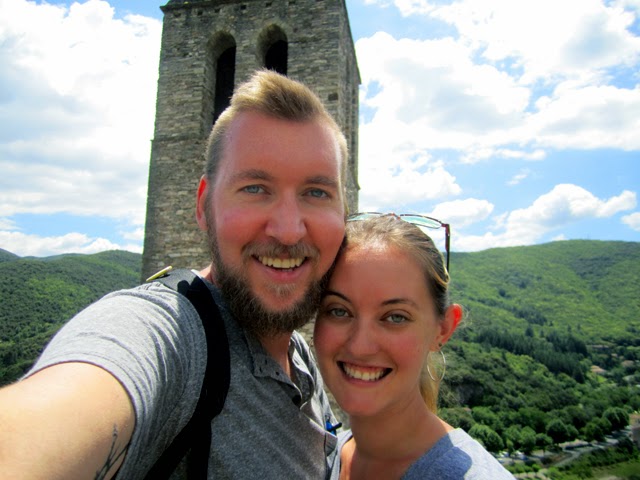 Over the course of the next two weeks we helped renovate the living room, dining room/kitchen, hallway, master bedroom, laundry room, guest bedroom, outside walls of the swimming pool and two of the walls on the outside of the house. We explored Olargues and the surrounding area, eventually found the Piste-Verte :), and hiked and swam in the river and in springs in the nearby mountains. 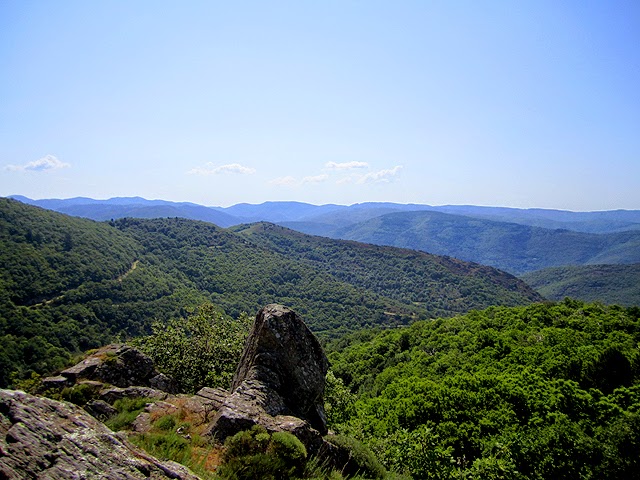 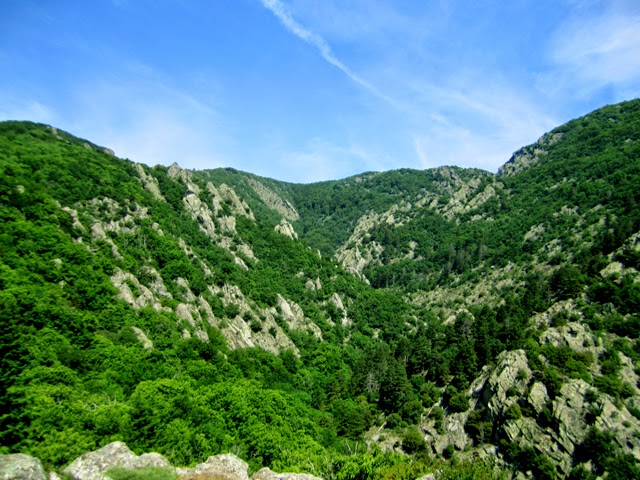 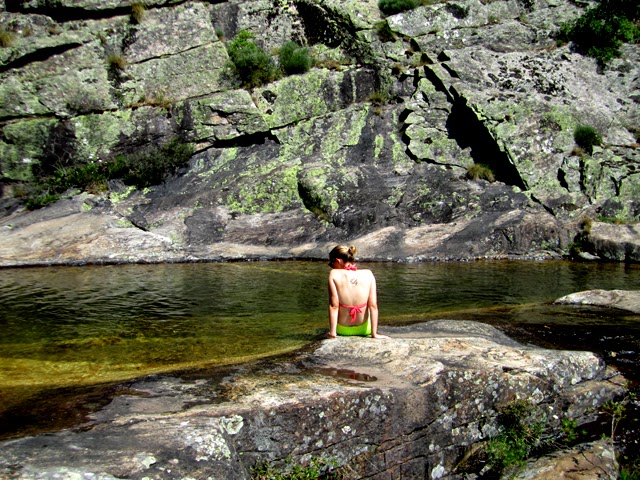 It was incredibly nice. On one of our last days there Norbert and Elke took us to a small local music festival where the local people played instruments and sang. 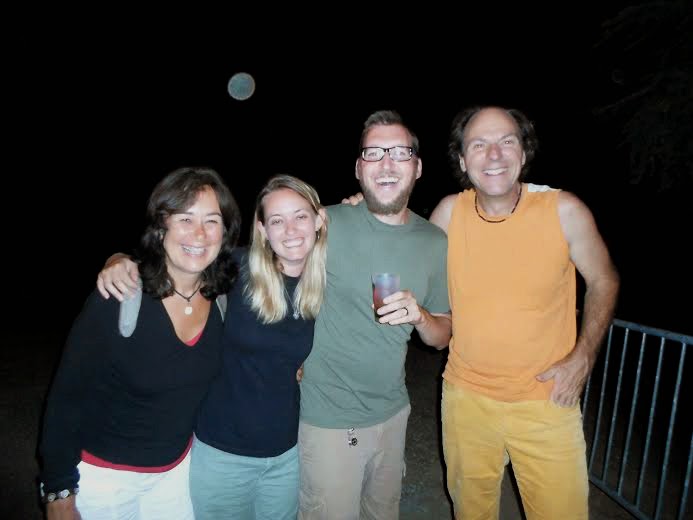 Norbert and Elke were so incredibly nice and generous to us- lending us their bikes, cooking us amazing food and driving us all over the place to see the local sights. We had an amazing time and it was really hard to leave. Hopefully all of our workaways will be as nice! 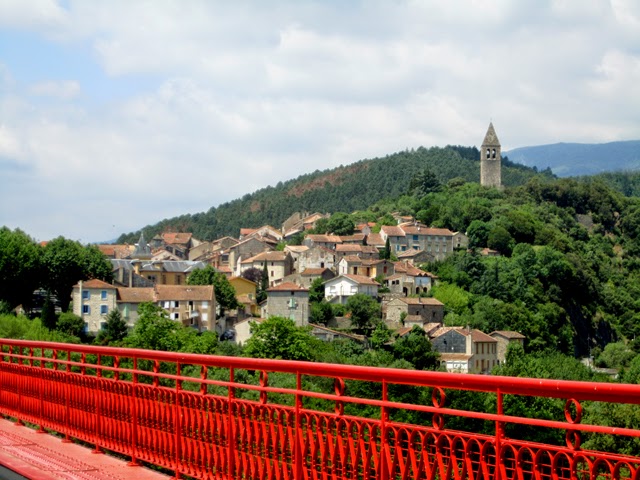 Posted by The Adventures of Josh and Johanna Bryant at 9:32 AM