After nearly 30 hours of travel, on three planes with two different layovers, we finally landed in Ho Chi Minh City.  Upon arriving, we were concerned about long lines to get our Visa, based on the rumors we had heard.  But it was a ghost town, and we were able to walk right up and pay.  We had secured "Visa On Arrival" documents ahead of time, so we just had to fill out a small form to get in, but they didn't even care what we wrote, as long as we filled in most of the columns.

After getting through customs we picked up our bags and found a man waiting with a sign with Johanna's name.  He worked for the MyMy Art House, and motioned for us to come to his car.  It was a tiny white toyota, and any time it came to a stop it felt like the wheels were going to shake off.  As we took off from the airport, we were exposed to our first taste of Vietnamese driving. 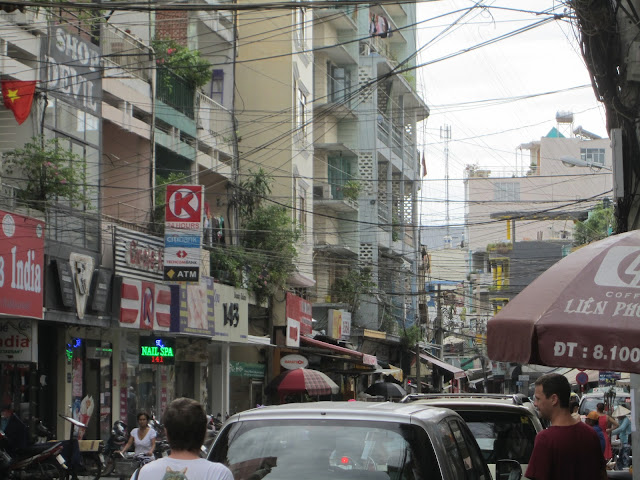 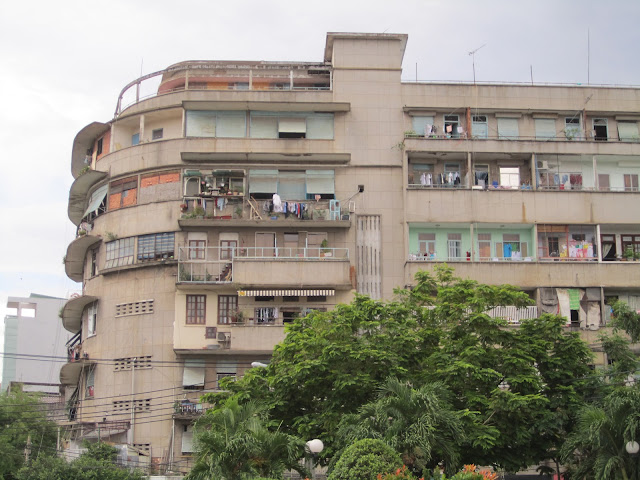 While there are lines on the road, they literally serve no purpose, as people seem to drive in multiple lanes intentionally.  There are more scooters than you can imagine, and they ride so close together they resemble a school of fish.  Amazingly, this somehow works, as we've only seen one accident so far, and we have experienced numerous close calls.  Also, everyone honks their horn... constantly.  If you want to cross a street, simply walk out into it, slowly.  As you make your way across, make sure oncoming drivers see you, and they will adjust their course.  It's like parting the red sea. 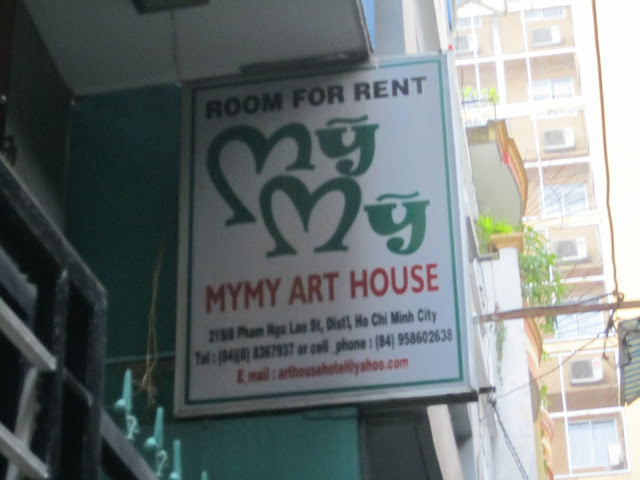 After settling into our room in the guesthouse, we decided to go for a walk around town.  Apparently we stick out as tourists, as we were accosted constantly by cyclo drivers offering to give us a ride.  Many had little journals with testimonials from other tourists who recommend them.  As we learned, these are fake, and these guys are just out to rip you off as quickly as possible.  Luckily we learn fast and have become quite adept at telling them no and moving on. 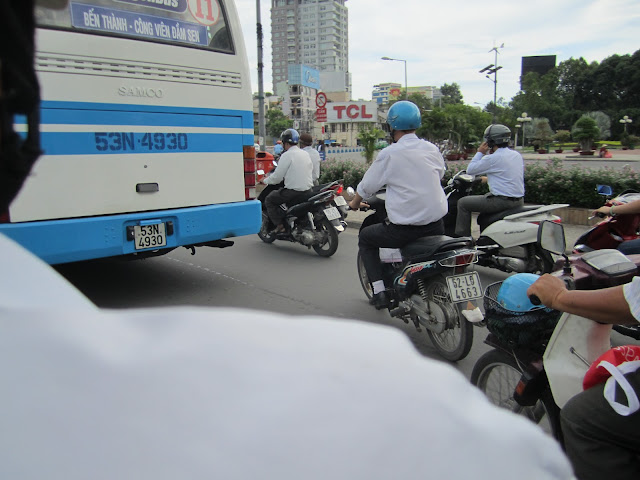 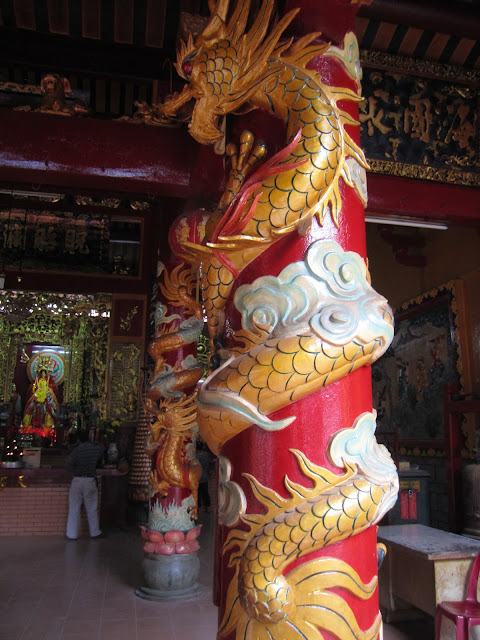 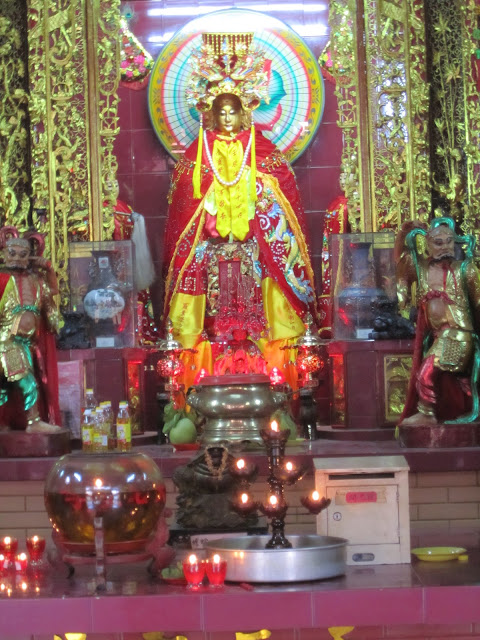 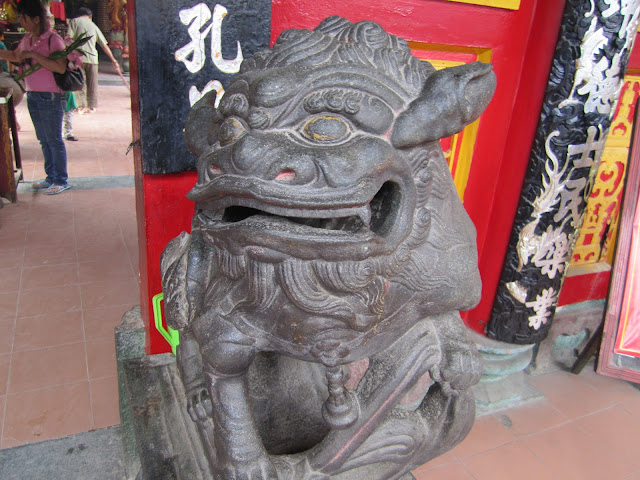 We did take a ride though, and visited several Buddhist temples in the city.  The temples seemed very tourist oriented, but the drive alone was worth it as we got to experience riding in the unique traffic here.  Pictures don't do it justice, but there are numerous moments you will find your hands firmly gripping the safety bar in fear. 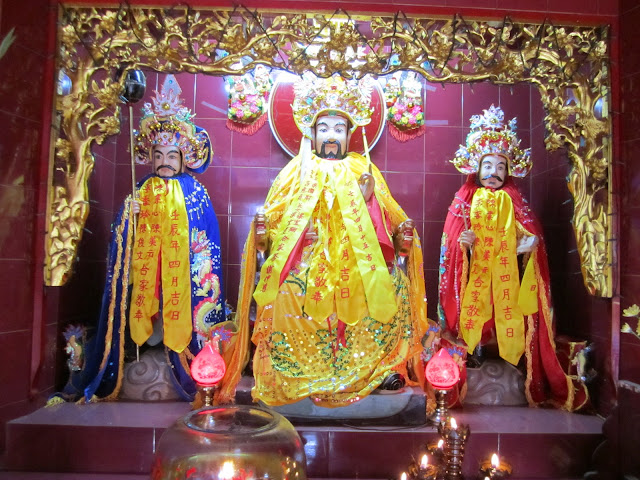 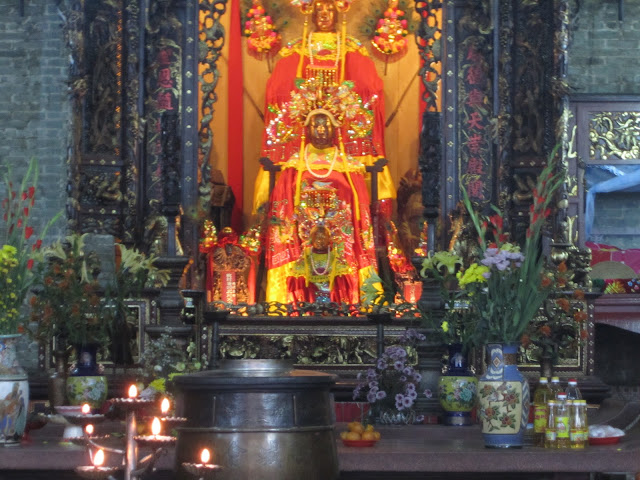 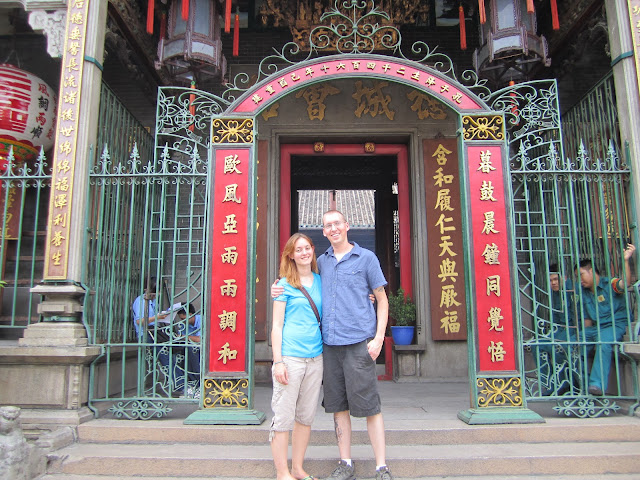 After the temples we went to bed early, as we were exhausted.  The next day we set out to walk the downtown area of the city.  First we visited the War Museum.  It had several floors worth of exhibits, and tons of photographs.  Including an entire wing dedicated to the results of the US using Agent Orange.  The pictures were incredibly graphic, and we don't really feel they are appropriate to post. 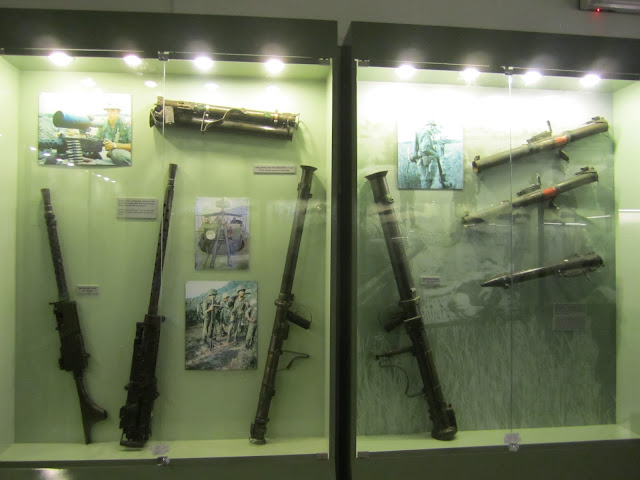 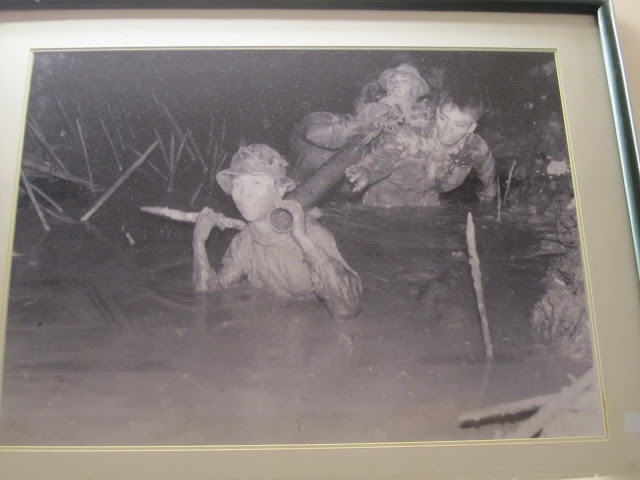 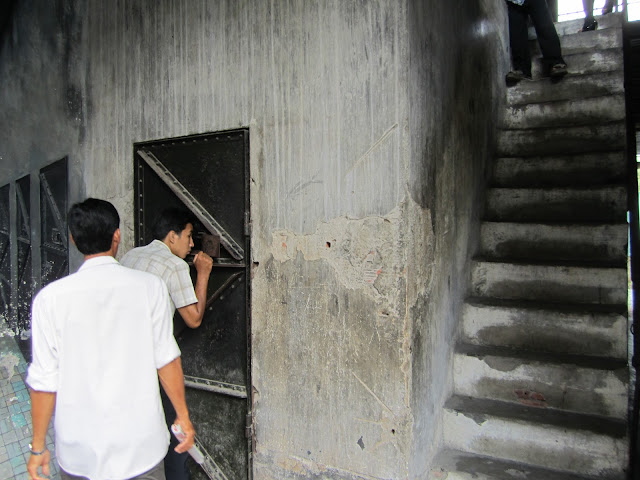 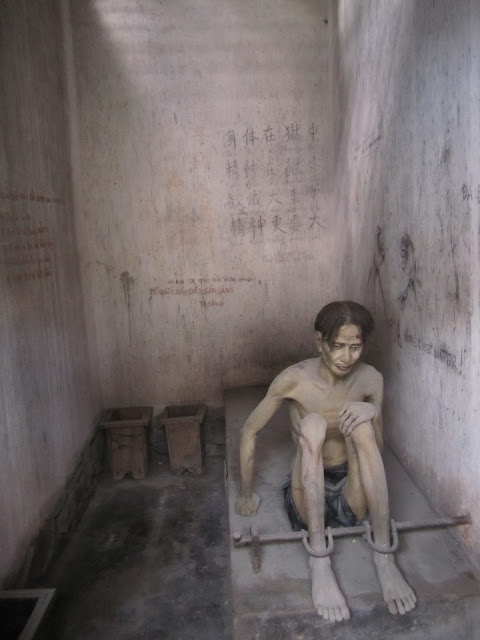 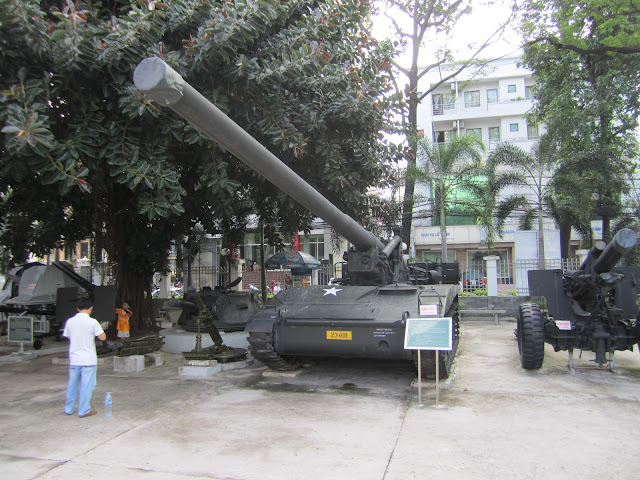 Next we went to the Reunification Palace, which looks impressive on the outside, but turned out to just be floor after floor of roped off meeting rooms.  Fortunately, the view from the roof was pretty nice. 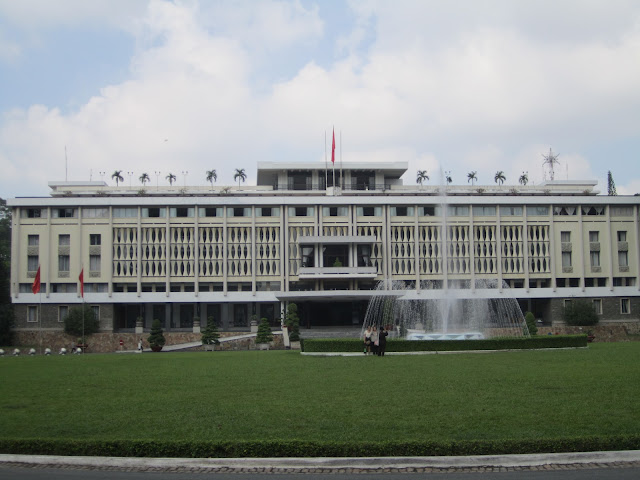 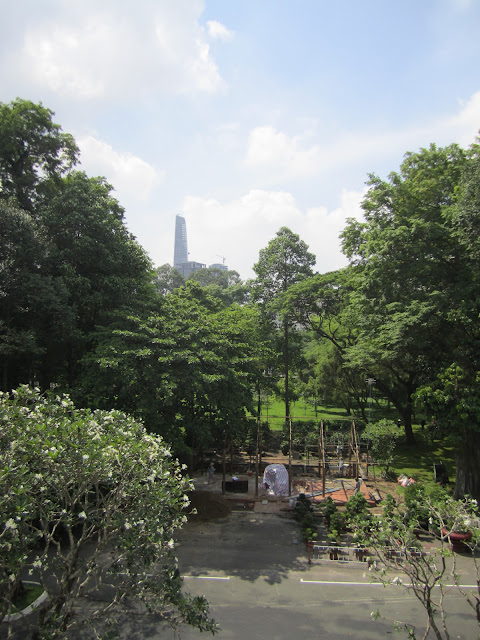 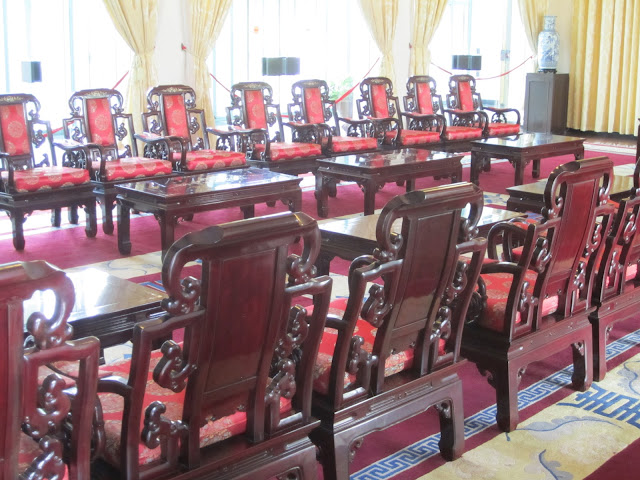 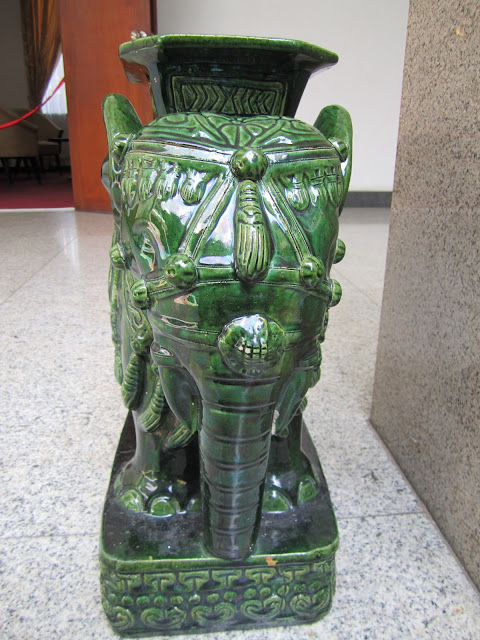 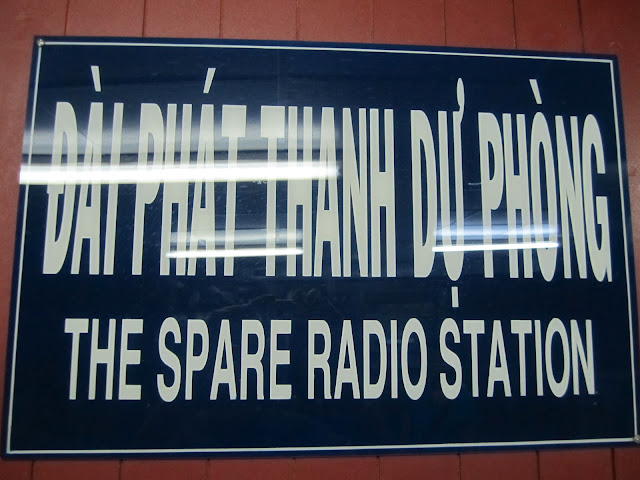 After that we visited the Notre Dame tribute Church, and then visited the local market, where Josh got a new watch, and we had some great street food and exchanged stories with a Korean couple. 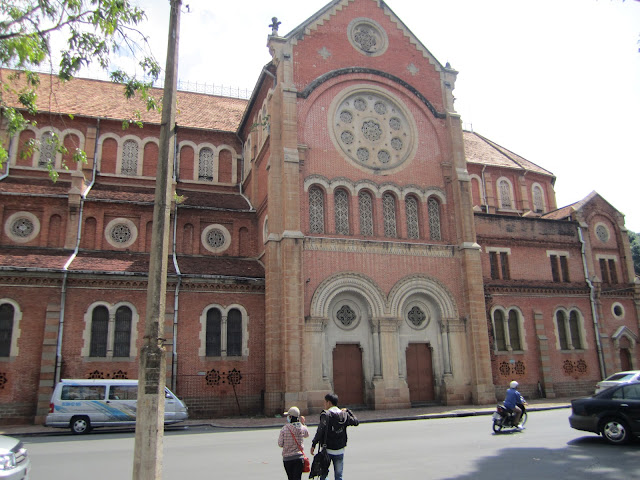 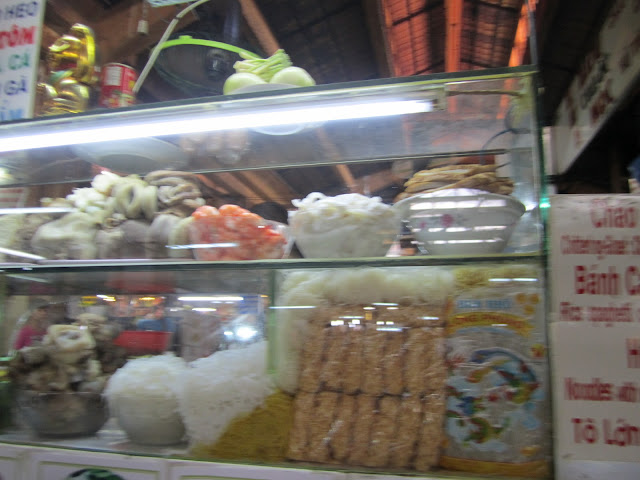 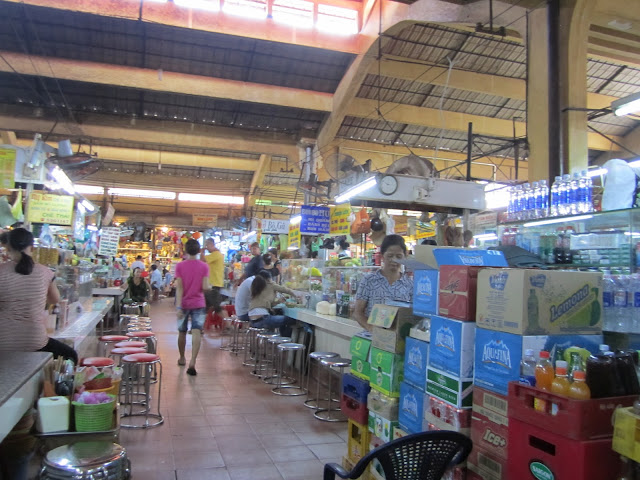 Ho Chi Minh City has been great so far, but tomorrow morning we are leaving the chaos of the city to head to a small beach town called Mui Ne.  Hopefully we can update again soon.

Posted by The Adventures of Josh and Johanna Bryant at 10:09 PM